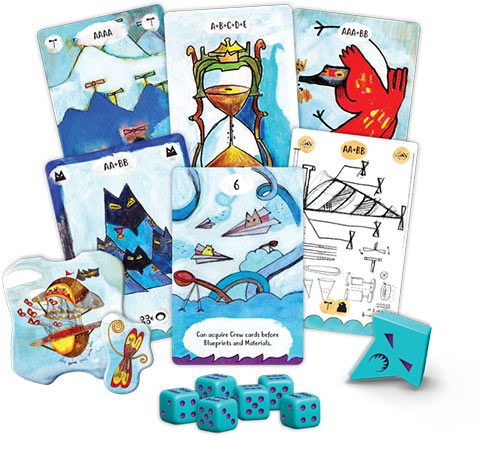 The games in the Oniverse series by designer Shadi Torbey are really something special, with enchanting aesthetics and whimsical characters, I have a soft spot for such original art, combined with enjoyable gameplay. His latest, Aerion, is no exception. Like the previous games, Aerion plays either as a solo game, or co-operatively with 2 players. It is the fastest to play in the series, some playthroughs lasting as little as 15 minutes, including the set-up and pack-down (which, may I say, is something I’ve come to greatly appreciate of late).

Aerion is a dice game, taking inspiration from the flow of Yahztee. You roll your dice, and pick which ones to keep and which ones to re-roll up to 3 times. Meanwhile, you’re trying to accomplish a set, such as 3 pairs or a run, to buy certain cards to finish building all of your aircrafts, each one needing 3 cards (the blueprint, material, and crew). It’s a very easy game to learn, but still challenging! This little puzzle is a satisfying one, and once you’ve had your fill of the base game, you have additional rules to expand the game into something even deeper, if you choose, right in the box.

Prev
Back
Next
© Copyright 2021 Mind Games