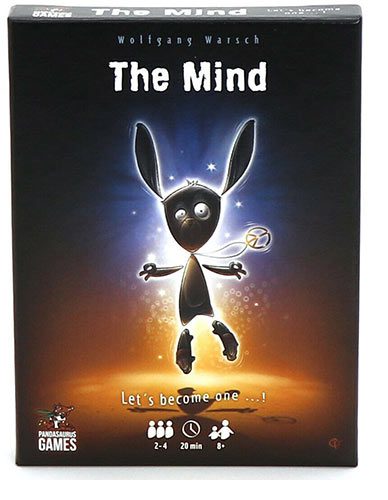 Commitment is a big part of what makes a game immediately playable. The time a game takes to play or the complexity of its rules can steer people away when it comes to pulling it off the shelf for games night. Robinson Crusoe is an excellent game, but in my house it doesn’t get played nearly as often as it should because it’s both time-consuming and complicated.

Thankfully, there are heaps of fun games that are easy to learn and quick to play. Everyone’s heard of Exploding Kittens and Monopoly Deal, so over the next few weeks I’ll take you down the road less travelled, and tell you about five games that you can just pick up and play.

The Mind is a cooperative card game for two-to-four players that couldn’t be simpler. We want to beat all the levels, and we do that by playing all the cards in our hand (at level one we each get dealt a hand of one card, at level two we get dealt a hand of two, etc.). In The Mind, cards are numbered 1 to 100, and between us we have to play them in ascending order, but the catch is we’re not allowed to communicate. No words, no gestures, no nothing. Just a stony poker face and intuition. Admittedly, I was a little sceptical about The Mind the first time I played it. But when you sit down at that table something happens. You get wrapped up in it. The air is thick with tension as half the players look desperately at each other and the other half stare stoically at the table, everyone silently screaming: “What card comes next?”

Prev
Back
Next
© Copyright 2021 Mind Games