Welcome to the city of Quedlinburg! Here witches, doctors, magicians and other healers (collectively known as Quacks) use their skills to brew potions. It is a lucrative business to cure smelly feet, homesickness, hiccups, relationship woes and more. Each Quack uses their own brews and secret recipes hoping, one day, to become Quedlinburgs most successful healer. Will it be you??? 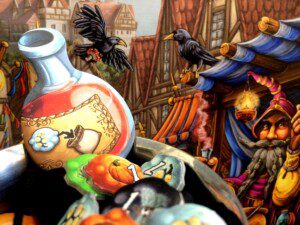 The Quacks of Quedlinburg is a potion brewing, push your luck board game rich in style and laughter. Players take the roles of Quacks, attempting to brew better and better potions by mixing ingredients into their cauldrons. Each turn players simultaneously draw a random ingredient from their pouch and add it to their cauldron. Players can choose to either finish their potion there or draw another ingredient and see what they get. There is no limit to how many ingredients a player can draw per turn. 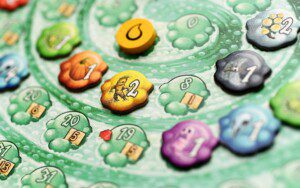 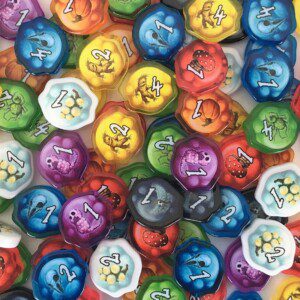 The "push your luck" element comes in with players deciding whether or not to draw another ingredient. Another coloured ingredient might unlock more Coins and bonuses but if it's white... the whole cauldron might explode. As players spend coins to add more coloured ingredients into their pouches they effectively DECREASE the chances of drawing a white ingredient. However, with more coloured ingredients in their pouch it's safer to draw more and more ingredients, effectively INCREASING their chances of pulling a white ingredient. The fact that everyone is drawing at the same time means it's very difficult to count another players score, as their potion could spoil at any time. Greed is a powerful emotion and plays a big role in The Quacks of Quedlinberg. Some players (like myself) can't help themselves and just want to pull one more, other times people will draw out of necessity in order to catch up on points. Sometimes being brave pays off. Other times though.... 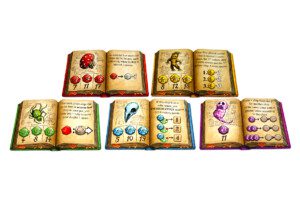 2018 Winner of the Kennerspiel des Jahres (Connoisseurs Game of the Year). It's a beautiful set, full of bright colours and character. The player boards, ingredients, tokens and pouches make it a very tactile game to play. It is easy to learn, very additive and unique in both theme and gameplay. Playing Quacks is an exciting and hilarious experience, this game is FUN. It also has two expansions The Herb Witches and The Alchemists for those wanting more.

So if you're looking for a cure to boredom, no fun and dreariness then get yourself a dose of The Quacks of Quedlinburg.